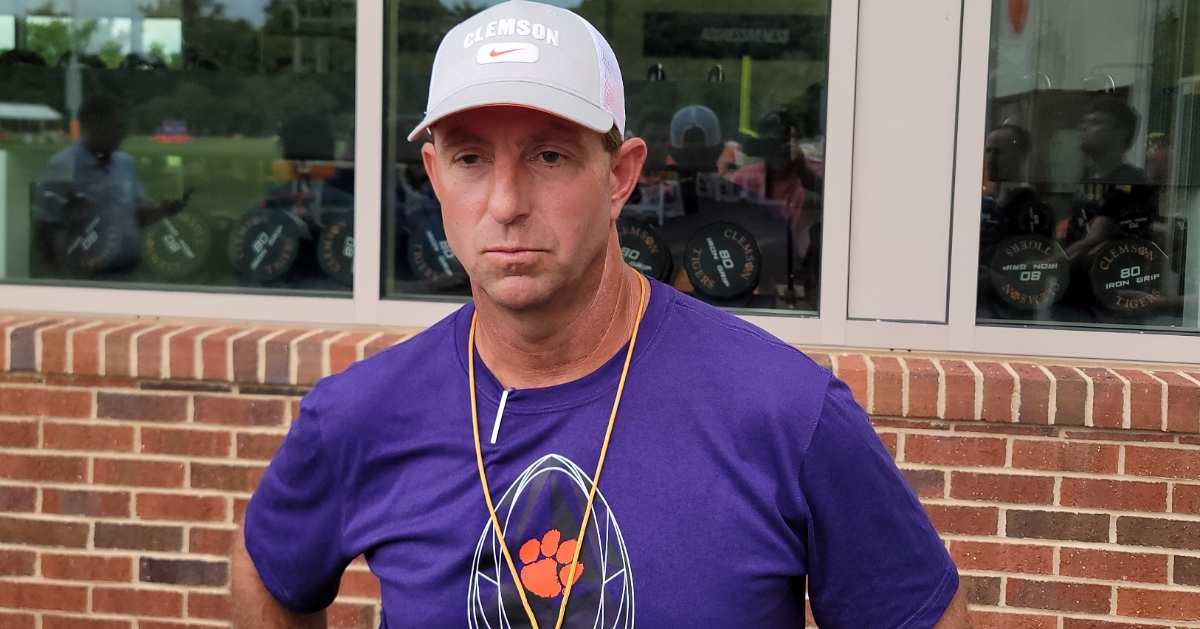 Clemson doesn’t have to look very far for fuel for the fire ahead of this weekend’s game, but head coach
Dabo Swinney says the Tigers have to look internally for the focus that comes with winning a big game.

Clemson hosts the 10th-ranked Wolfpack Saturday at 7:30 pm (ABC). ESPN’s College GameDay will be in town, it’s a night game, and the winner has the inside track (for now) to the ACC Atlantic Division Championship.

“We have an unbelievable environment that’s got more juice, I guess, to go with it and got all kind of external stuff, but as I’ve said many times, that’s fuel for the fire. But external factors, night game, rankings, all that, that cannot be the fire. The fire has to always come from within. All that other stuff can be a little fuel thrown to it. But if that’s the stuff that really motivates you, then you’re never going to be consistent. And I think that’s what we’ve tried to do year in and year out and I think that we’ve done a great job of that is being consistent. It’s not that we win every game, but man, we have consistency year in and year out because we have a certain mentality. And all of a sudden now I’m super motivated because of rankings, time of play, gameday, all that stuff? It just leads to inconsistency, because then you show up the next week and that stuff’s not there, and so then you get beat.”

“This is a huge division game every single year since I’ve been here, and then certainly when division play came about, now it’s a division game and you’re not going to get to Charlotte if you don’t win the division. NC State has been a tough division opponent every single year, and this is a great football team. They are ranked 10th in the country because of what they’ve done. They’ve had a lot of consistency and they have a lot of experience, a lot of veterans, a bunch of all-conference players on both sides of the ball. They have one of the best quarterbacks (Devin Leary), I mean, a legit, no doubt NFL dude, and they’re well coached, a big game every year. They do a great job, as good as anybody we play.”

Swinney said the team is in a good spot and will put out a list of available players a few hours before the game. No other injury information was given.

On communication within the secondary

“It’s been a really good week of practice. I’m pleased with how they responded, so hopefully that will show up Saturday night.”

“Really proud of him. Night and day from where he was last year. I mean, he’s just really grown in his confidence, his technique, his understanding details. He’s playing fast, he’s playing physical, and it’s still all in front of him, but, man, he’s light years ahead of where he was this time last year. That group has really gotten better and better each week. So even Blake (Miller) had a great game last week, had five and a half knockdowns. The game has slowed down a little bit, so this will be a different animal this week for him. So excited to see how he holds up and all those guys. This will be a big game from a communication standpoint as far as how they handle the pressure.”

“We put him in there as a starter last week. Felt like he deserved that opportunity. And he’s a great young player, but one of the reasons you’ve seen him is because he’s demonstrated that he’s got great feel, great instincts, he plays fast, and he’s very coachable, and he understands the plan. One of those young, rare guys that can really truly get it in the meeting room, take it to the practice field. It takes a little while for guys to develop that way, but he’s a natural.”