Have you been through a tough breakup, the kind which left you feeling physically drained, so much so that you didn’t have the energy to go to work? Did you wish you could take a leave of absence for the heartbreak similar to the one offered for sick days? If your answer is yes, you are not alone.

Recently, a heartbroken woman sparked a heated debate online by asking the internet if it’s acceptable to take time off work to deal with a breakup.

The question was posted on a UK-based website called ‘Mumsnet’ which describes itself as “a website where parents could swap advice about not just holidays but all the other stuff parents talk about.”

Watch Gravitas | Study: Older women are more likely to get their heart broken

Posted anonymously the user wrote “I’m going through a horrible relationship break down. We were together a long time and we have a young child (under two). I am heartbroken and I wake up every day and burst into tears straight away when the reality of my life hits.” 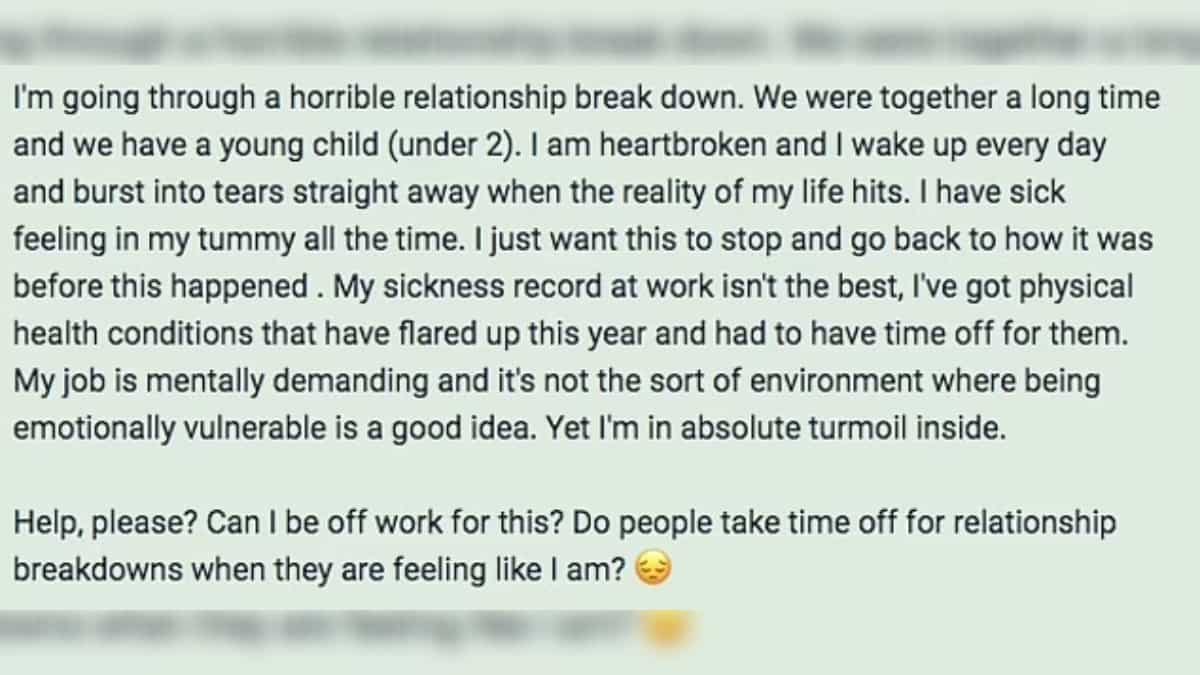 She further talks of her previous less-than-perfect attendance due to physical ailments she suffers from and asks “Help, please? Can I be off work for this? Do people take time off for relationship breakdowns when they are feeling like I am?” .”

Also read Humans yet to set foot on Mars, but the red planet is already ‘littered’ with 7000 kg of our trash

Her question has had many replies, while some users were sympathetic, others were not and told her she needed to ‘adult up’ instead of wallowing in self-pity.

The question seems to have been taken down, but the dilemma it poses remains.

A 2010 study published in the National Library of Medicine says “Romantic rejection causes a profound sense of loss and negative affect. It can induce clinical depression and in extreme cases lead to suicide and/or homicide.”

Multiple studies claim that the emotional anguish of loss is registered by the brain in the same manner as physical pain. This might explain why you could get the sensation that your heartbreak is physically hurting you.

The phrases “it is gut wrenching,” or “like a slap in the face” might actually hold some weight. So what do you think? Should there be a “heartbreak leave” and would it help in the long run?

(With inputs from agencies)

You can now write for wionews.com and be a part of the community. Share your stories and opinions with us here.