As the weather gets colder, bugs migrate indoors.

As a result, people will start to notice bug bites and infestations.

Normally people see anything from ants to roaches to spiders. But recently scientists discovered a new type of mosquito in New Mexico.

Not to worry though, they are summer bugs.

People will, however, start to see more winter bugs, which are mainly beetles and spiders. Especially tarantulas and recluses, because their migration takes place from September to October. 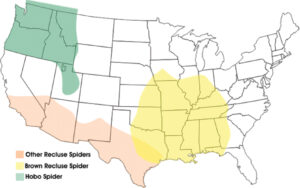 The Recluse Spider is common in most of the US.

Tarantulas are abundant in Northern New Mexico, around Santa Fe and Albuquerque. If spiders are “cool” to you, the best time to look for spiders is in the late afternoon around sunsets.

There are other types. In Rio Rancho, people post pictures of all kinds of spiders and, sometimes, centipedes.

Rio Rancho’s Advantage Pest and Weed Control says brown recluses are most common here during the winter though.

“Humans will typically find the webs of Brown Recluse Spiders in garages, sheds, woodpiles and similar places where the spider will be left undisturbed by human activity most of the day. It appreciates human made shelters and the warm/rain-free environment,” according to their website. 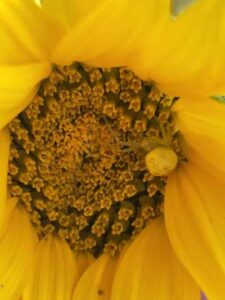 A photo of a Goldenrod Crab spider by North Hills resident, Lynn Bloom, on the Nextdoor app.

Winter insects are in search of two things — food and warmth.

According to pest control experts. people should make sure food is sealed in plastic or glass containers and crumbs or food debris are quickly cleaned up.

They also suggest that you seal the gaps which will help to control the bulk of the issue.

A gap in the window sill, cracks in the flooring, or a small hole in the wall could allow pests to get inside.

There are also some repellents and sprays that can help. The problem is not all of them are healthy for pets or people.